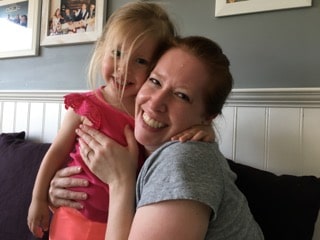 Meet RM Friend MarisaNickols, Co-Executive Director of Baby’s Bounty Montgomery County.  Baby’s Bounty MC is a non-profit 501(c)(3) that provides safety, health and wellness essentials to at-risk infants up to six months of age who are born into poverty, homelessness, abuse, neglect, and other disadvantaged situations.

When Marisa was pregnant with her first child she noticed, “my husband and I had lots of support from friends and family.  What we weren’t given, we were able to buy–whatever was needed.”  Reflecting on her good fortune she “started to wonder what happens to new moms and families that don’t have the resources?”  Marisa first heard about Baby’s Bounty when she caught a segment about the charity on the news. “I decided to donate my daughter’s things to the charity when she grew out of them.”  She was surprised to hear a few months later the charity was closing its doors.

“I have a background in politics–and I thought those skills could be applied to running a charity.”   The needed skills of organizing volunteers and getting a message out to the community overlapped well. Nickols reopened Baby’s Bounty 3 months after the doors were closed. In FY 2015-2016 Baby’s Bounty helped 127 babies, doubled that the next year and in the first 6 months of FY 2017-2018 have helped 220 babies in Montgomery County.

“Some mothers don’t have an infant car seat when it is time to leave the maternity ward.”  Babies in need are identified by hospital case workers, Montgomery County or Health and Human Services referrals. Cribs for Kids is an organization that helps purchase Pack-n-plays (portable cribs) at a good price for the charity. Used infant car seats aren’t allowed to be donated; they have to be purchased and donated new.  Monetary donations allow the Baby’s Bounty to purchase items for “Safe Sleep, Safe Travel, Health & Hygiene.  The charity is funded through a combination of 2 grants from Montgomery County, donations and fundraising efforts. The Baby’s Bounty “Run Rockville 5k and Stroller Derby” will be April 22.  Click here for the flyer.

To learn more about Baby’s Bounty of Montgomery County visit their website http://www.babysbountymc.org/